Throughout its long and somewhat chequered History, the Club has been twice re-formed and used four different courses on land at The Ridings and Sodbury Common. With two World Wars intervening, Club activities were severely restricted, if not curtailed completely.

The 9-hole course in use prior to the 1914-18 War on the Stub Riding was closed at the outbreak of hostilities and the 9-holer of the 1930s was ploughed up and became wheat and potato fields when The Ridings were requisitioned during the 1939-45 War.

The post-war Club revival saw the abandonment of the Stub Riding as a golf course in favour of a new one laid out on the Common and it was not until 1971 that members at Chipping Sodbury had the facilities of an 18-hole course for the first time in the Club’s history with the opening of the new course on the Mead Riding. 1976 saw the addition of a substantial clubhouse and the 1990’s the addition of voluminous lakes and mounds. 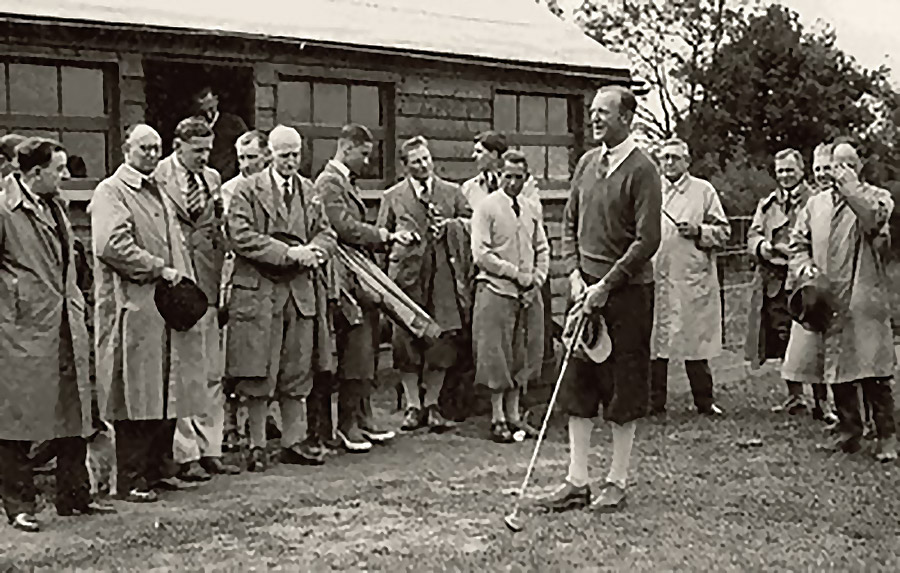 2nd course opening by His Grace The Duke of Beaufort 1933.

About the time that the Saltford Club had just been formed, and a new Club opened at Knowle, plans were already in hand in the second half of 1905 for the mapping out of a new course at Chipping Sodbury. Promoters of this Sodbury venture sought the advice of Mr Wardale, then the Rodway Hill professional, who, according to the local “Gazette” account of the period was “a man of ripe experience in the matter of laying out courses”. Mr. Wardale visited Chipping Sodbury and marked out what was described as “a very useful 9-hole course which can easily be extended to 18 holes. Although all on the flat, it promises to be very interesting and every available natural hazard has been utilised.”

“Three consecutive holes (we are told) will be of excellent length – 450, 400 and 350 yards at least. The turf is of very good quality and it is said that the ground has not been ploughed for 800 years – perhaps more. It was given to the burghers of Chipping Sodbury by Charter about the year 1200 and the document is still in existence. The course possesses two great advantages over some places in this district – the ground is always dry in the worst of weather, and, as for worms, there are none. The 6th hole is a very sporting one, there being a stone quarry, hedge and road to negotiate, all within about 70 yards. The course is beautifully situated and should make a really first-class one when complete”.

A committee was formed and Mr. Wardale was engaged for a few months to get the course into shape. Saturday, May 12, 1906, saw the official opening of the new “golf links” on the Stub Riding by Sir Gerald Codrington, Bart (Baronet). It was quite a social occasion, the large attendance including “many of the principal residents of the town and neighbourhood”. One of them, Mr. J. W. Trenfield, said that when the members of the Town Trust had been approached to allow golf to be played on The Ridings, they “readily gave their consent as they realised that the formation of a Club would be to the interest of the town and neighbourhood”.

Early Patrons were Sir Gerald Codrington and Messrs. Francis F. Fox and P. Burges, Mr. R. A. Fox being the president and Dr. T. C. Leman, captain. Hon. treasurer was Mr. C. G. Watts and Mr. R. Wilson, the hon. secretary. The committee consisted of the the Rev. W. H. P. Harvey and Messrs. J. W. Trenfield, F. G.Beatty, A. B. Cryer, and J. Gale. The president donated a challenge trophy – known to this day as the Fox Cup which is competed for annually. So the Club proceeded until the outbreak of the 1914-18 War when the course was closed.

In June 1932 several local golfers got together and decided to re-open the course with the consent of the Town Trust. On the administrative side much of the work fell on the broad shoulders of Mr. A. J. Howell, a true golfing pioneer in Chipping Sodbury, who was hon. secretary at the time. His energies stood the Club in good stead then and in the future revival of the Club in the 1950s and “A.J.”. as he was affectionately known, was made life president of the Club many years later in recognition of his services. Annual subscriptions for full membership in 1932 were: gentlemen two guineas, ladies 1 1/2 guineas. Hon. treasurer was Mr. C. W. Corder. On Saturday May 27th 1933 His Grace the 10th Duke of Beaufort performed the official opening ceremony (picture above).

These were the halycon days of golfing at Chipping Sodbury with a Club membership of about 130 including the ladies; the era of plus-fours and the hickory-shafted mashie and niblick; the days when members paid a 6d entry fee for competitions or had an old-fashioned “bob” on the game. Then came the 1939-45 War and that was the end of golf on the Stub Riding course. The Ridings were requisitioned by the Ministry of Agriculture in 1941 and ploughed up.

The first task of the committee was to view two suggested sites for a 9-hole course on The Ridings and on Sodbury Common. With the consent of the Conservators, a course was laid out on the Common. Members were asked to lend not less than £5 each as early as possible, subscribing two guineas each immediately and a further three when needed. “What is needed is the backing of all golfers who must take the facilities as they come and not expect a Walton Heath to develop in 24 hours”, wrote “Wanderer” in his “Sports News and Gossip” columns of the “Gazette” of Saturday 8 May 1954. Official opening of the Sodbury Common course was performed by the Duke of Beaufort by driving off from the first tee on Wednesday 29 June 1955. His Grace expressed his pleasure that a new course had been laid out at Sodbury and hoped that it would eventually be increased to 18 holes.

Unfortunately, the hopes of quickly building up a substantial membership never materialised. Limitations of the new course soon became apparent with its wire-enclosed greens cracking for lack of water, cattle wandering at will during the summer months and no permanent staff to maintain it. Interest waned but still the faithful few (and a mere handful at that) kept the Club just ticking over – people like the Boulton Brothers, Fred and Jim whose two annual fund-raising efforts (a dance and a flower show and sale) provided the principal sources of Club revenue and consistently confounded the gloomy forecasts of the current Club treasurer! Then, at about the time serious thought was being given to winding up the Club, Mr. Guy Greader appeared on the Sodbury scene and was quickly coaxed into office as competitions-secretary. He provided the ‘fillip’ that the waning Club wanted and its ultimate survival, it is readily acknowledged, was due largely to his enthusiasm and personal efforts. More members joined the Club so that the hon. secretary’s report to the 1963 annual meeting “passed comment on the membership now being over 100”.

From then on, the Club never looked back. Increasing its membership and improving its facilities under the able guidance of a succession of energetic officers and committee members. Without doubt, the Club entered the most eventful period in it’s history during the 1960s with the decision to proceed with the building of a new 18 hole course on the Mead Riding.

A firm of top Golf Course Architects, namely “Hawtree & Taylor” was employed to design the course. Fred Hawtree was the son of the company founder, whose partner was the famous J.H. Taylor, part of the great triumvirate of Taylor, Braid & Vardon who won everything in golf from the turn of the century until the 1920’s. After 2 years of construction work, the official opening ceremony took place on Saturday 26 June 1971 which was once again performed by His Grace the Duke of Beaufort, completing his ‘hat-trick’ of course openings at Chipping Sodbury.

A gala week of events followed to mark this auspicious occasion and one of the highlights was a challenge match between some famous professionals of the day led by Max Faulkner (the 1951 Open Champion) and the Gloucestershire County team (the 1970 County Champions) led by the captain Ken Graveney. The top professionals were: Peter Alliss, Brian Barnes, Malcolm Gregson, Tommy Horton and Dave Thomas, who were joined by two well known West Country professionals, Peter Green and Wally Smithers.

A substantial clubhouse was completed in 1976 and the course was continually improved over the years with tree planting schemes and drainage works. In 1994, Captain Pete Lewis, Chairman Ken Douglas and Clive Pearce spearheaded major course improvements. Lakes and picturesque waterways were introduced with the spoil from the excavations being used to enhance teeing grounds and create large banks and mounds. Ever helpful, the members pitched in to clear stones brought to the surface. The result, a magnificent course with sculptured mounding and lakes which are now rich in wildlife.